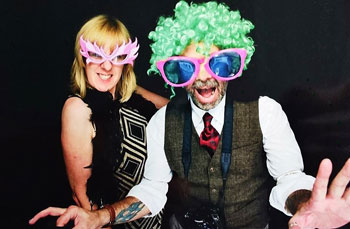 Kat and Spencer met in 2012 at a pub quiz in south London. In October 2016, we came to stay at what was then called 'The Minnis Whitehouse Bed and Breakfast' as a birthday present for Spencer. As we both love art and architecture, art deco in particular, we raved about how much we liked the house and it's great location to the then owner, Sharon. She informed us she had just put the house on the market, so the temptation to live in a dream house in a dream location was too hard to resist. Our offer on the house was accepted, and a mere thirteen months later, we moved in! Kat had been collecting art deco since the 1980's and Spencer since the 90's, so it is great to have a home where these pieces look their best. As a child, Kat had an art deco dolls house, (which she still has) we realized it had a resemblance to our new house, so it was decided we were going to match the colour of the new windows to that of the dolls house!

We have worked hard on restoring as much of the interior as we can. The only original feature left is a fireplace in the living room. We have both seen so many similar buildings from the Art Deco period either demolished, altered beyond recognition or left to fall apart. We were keen to do our bit not only to save, but to preserve and restore the house back to it's original state. It has taken well over a year, lots and lots of research, emails, phone calls, drawings, plans etc and plenty of patience to get where we are now. It is an ongoing process but we are close to the end now. We have already restored the original Canadian oak flooring, had a new industrial strength insulated EPDM roof fitted. This year we finally had the new aluminium 30's style windows installed and house completely re-rendered with flexible silicon based k-rend. We are so pleased with the end result. People from the village have congratulated us on what we have done, others stop to take photos and a few times have knocked on the door to speak to us directly about the house!

As for the interior, much like the exterior, we wanted to recreate the Deco style as much as we could. We already had quite a collection of Art Deco paraphernalia between us before we met. Since then we have travelled as far north as Edinburgh and Glasgow in Scotland and as far south as Cornwall sourcing original pieces of furniture, homeware and pictures for the house and rooms. We have had all of the furniture thoughtfully restored. There is quite a bit of history attached to the house which we've used to name, decorate and furnish our rooms, from the 1920's/40's to the 1960'/70's. You can read more on the room pages.

Spencer's mother taught him and his younger sisters to cook when they were young so he's very happy in the kitchen cooking breakfast for guests. Kat has been a vegetarian all her adult life, is a keen re-cycler and is environmentally conscious, so wherever possible we try to make sure our food, drinks and toiletries are organic, eco-friendly and Fairtrade.

Our house is unique, and we're doing something a little different here, we hope you like it as much we do!

We look forward to welcoming you to Twentieth Century.